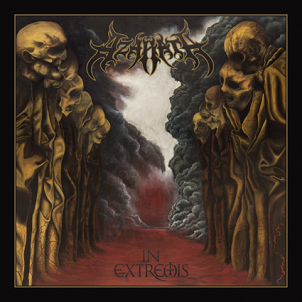 Zbigniew Robert Promiński, or more commonly known as Behemoth’s Inferno, is widely regarded as one of extreme metal’s most powerful drummers. He may not be as elaborate as some of his contemporaries, but his blasts have brute force and purpose, serving as the anchor for Behemoth’s glory-era bombast as well as Azarath, the band he formed in 1998. With Behemoth leader Nergal off playing Johnny Cash-inspired stripped-down rock, there’s a precipitous need for Azarath, whose sixth offering In Extremis is simply punishing.

Loosely described as Behemoth without the black metal influence, Azarath serve as the rightful platform for Inferno’s drumming. Not surprisingly, he’s high in the mix, especially his snappy snare, thus giving his blast tandems (including gravity blasts) plenty of air-time. Jams like “Let My Blood Become His Flesh” and the Morbid Angel-on-Nile-like “Annihilation (Smite All the Illusions)” are direct shots, devoid of any sharp angles and edges. Rather, Azarath’s focused, no-frills attack reaps regular benefits throughout the album’s ten songs, with the over-the-top, hyper push of “Sign of Apophis” and album closer “Death” providing plenty of lock-and-stocked blast-off death metal ammunition.

Even with Behemoth’s towering popularity, Inferno has managed to keep Azarath relatively active, with the six-year delay between 2011’s Blasphemers’ Maledictions and In Extremis serving as the longest gap between albums. How much light this will shine on Azarath or Inferno’s drumming remains to be seen, but at face value, In Extremis stands stout and ready to overwhelm lesser death metal bands.