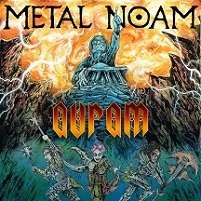 Metal Noam by Avram is a different take on politics in music. To start, the idea behind it is very unique…the whole concept of this record is to convey the message and philosophies of leftist linguist, anarchist, and all around academic, Noam Chomsky. A rather interesting idea…

It’s a brief EP, three songs in about 15 minutes. No vocals, by conventional definition, but rather a series Chomsky of speeches and debates set to heavy metal. The music itself doesn’t really follow or adhere to any specific genre; you get quite a range throughout. On the first track they open in almost black metal fashion, a loud shriek and blast beats over a ripping fast riff, but it quickly slows down and allows the “vocals” take to the forefront. “Weak and Miserable Men,” brings to mind the video for “One” by Metallica, with pretty solos and melodic strumming accompanying Chomsky’s thoughts on war and politics.

With the focus being the message, they use music as a compliment to the political presentation. This is very evident on the last song where they employ a doom/drone/noise approach where the music acts only as a textural and atmospheric accompaniment. There’s really no part on the whole album where the music nor the message overpowers.

The EP is available on Bandcamp for “name you price,”or otherwise free (like any good anarchist message should be!). It’s not likely to be an album that you see on any year-end lists, and it could use a little help in the production department, but it can’t hurt to check it out if you have any interest whatsoever. These days you don’t see a lot of metal bands taking the punk/anarchist/DIY approach. Respect for that.