Avatarium – All I Want (Nuclear Blast) 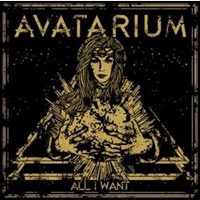 Inspiration can strike in the moment – as it did for bassist/songwriter Leif Edling in terms of this digital EP/10” vinyl release. Listening to old vinyl at the beginning of the year, the need to create something close to that material of a by gone era was born, and out came the title cut, followed shortly thereafter by “Deep Well”.

For those not in the know, Avatarium from Sweden contains ex-Evergrey guitarist Marcus Jidell, Tiamat drummer Lars Sköld, ex-Candlemass keyboardist Carl Westholm and relative unknown Jennie-Ann Smith on vocals – and the quintet perform a heavy, dark, and poetic form of doom rock/metal. Let’s tackle the two new songs head on: at a touch under 4 minutes, “All I Want” is a relatively up-tempo cut rhythmically for the band, Jennie-Ann giving off a stunning, almost mystical performance while the guitar, bass, and keyboards add a haunting atmosphere and heaviness that makes Avatarium special in their style. The echoing effects, wah-wah instrumental parts, and psychedelic shaker percussion passages from guest Michael Blair up the chill bump factor a hundred fold. “Deep Well” has more of a standard doom approach, Marcus hitting upon that aural uneasiness in both his main chord strumming and bluesy, David Gilmour-esque lead break while Carl’s organ parts add to the ominous nature of the arrangement.

Three live songs off the first album finish this release, taken from the band’s second live show ever at the Roadburn festival in The Netherlands. “Pandora’s Egg”, “Tides of Telepathy”, and “Bird of Prey” showcase their affinity for the genre in the best light possible – keeping the tone firmly entrenched in the music, giving proof that the best doom needs to be heard at loud volumes and in front of live audiences.

Are we bummed that we will never get another Candlemass studio record? Of course…but Avatarium establishes themselves on every release that quality, dark doom rock/metal will never die.