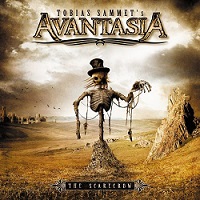 With Edguy taking a break after the mostly good Rocket Ride album, mainman Tobias Sammet has resurrected his Avantasia project, this time with a cast of characters culled outside of the metal world, giving the album a bit of a AOR-flavored twist. The first two installments of the Avantasia saga (The Metal Opera Pt I & II) were lauded across the board for flying the flag of epic power metal high, but this time, Sammet has opted for a more rock-based twist, laying off the power metal bravado for something more concerted and focused.

Part of the allure behind Avantasia is the guest musicians and hats off to Sammet for rounding up a diverse bunch of players in and outside of the metal realm: KISS’ Eric Singer handles drums, while vocals are contributed by Roy Kahn (Kamelot), Jorn Lande (ex Masterplan), Bob Catley (Magnum), Michael Kiske (ex Helloween) and Alice Cooper, of all people. Sammett handles the bulk of the vocals, but when Kiske lends his stratospheric vocals to “Shelter From the Rain,” one cannot help but get a burst of adrenaline, as Kiske’s voice is tailor-made for a double-bass driven number like this.

The epic title track stretches over 11 minutes and has cool Celtic vibe to it, made all the more valiant when Lande lends his Dio-on-Coveradale vocals. Sammet, ever the master of big choruses, comes through on more than one occasion on the aforementioned title track and “Shelter From the Rain” along with some choice moments in “Another Angel Down” and “Devil in the Belfry.”

The AOR flavored moments turn out to be highlights as well, especially lead single “Carry Me Over” which is sugary-sweet, but is oddly-catchy and is already the highest charting single in Nuclear Blast history. “Lost In Space” follows suit, with a more dramatic and somber tone, with some vocal flourishes from Sammet tossed about. Cooper’s appearance on “The Toy Master” is understated; as Cooper’s mainly one-dimensional vocals don’t do the trick on this otherwise stock song arrangement.

The Scarecrow is this scribe’s favorite installment of the Avantasia series. Sammett has a seemingly bottomless pit of good ideas in his head and The Scarecrow will most likely outduel any power metal-tinged album for the first half of ’08.