Despite their extensive back catalogue and revolving door of top notch drummers (including Derek Roddy, Tony Laureano, and Tim Yeung), Aurora Borealis have yet to really reach that upper echelon of death metal in their 20 year existence.  World Shapers marks the band’s sixth full-length album, and first for the Xtreem Music label.

The first band reference that comes to mind when hearing Aurora Borealis is that of Angelcorpse.  Vicious blackened death metal that doesn’t ease off of the blast beats, the two hold a number of striking similarities, though Aurora Borealis tends to come off as a bit more melodically proficient.  For those interested in playing the “who do they sound like” game, you’ll find a number of Morbid Angel, Malevolent Creation, and Monstrosity references in their technically flaring yet melodically captured material.  They’ve come to embrace a more sci-fi theme over the years, but thankfully they don’t get too caught up in creating more of an ambient and sample-intensive atmosphere as many bands do.  This is straight ahead blackened death that does not relent for its runtime, and it works.

With Aurora Borealis advancing with the subtlety of a bulldozer, the whole thing would be an exercise in boredom if not for their melodic underpinnings.  While some of it may not show among the first few listens (one exception: “Watchers From Above”), it does start to appear with subsequent playthroughs and keeps things from becoming monotonous.  Also aiding with this are the raspy vocals (again, a la Angelcorpse) that have a pretty high degree of enunciation, which is always a plus with this style of music.

For a band now into their second decade, Aurora Borealis are overcoming the odds and releasing some of their best material yet.  As an added perk, if you visit their website, they are offering pay what you’d like downloads (yes, that includes free for the cheapskates out there). 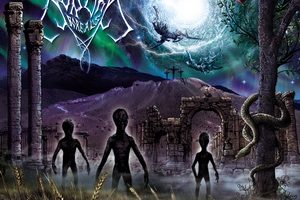