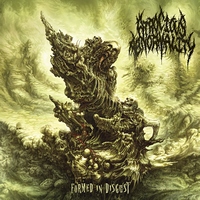 Guttural, seething, and pummeling death metal. Atrocious Abnormality’s second full-length effort, Formed in Disgust, hits just about all of the wanted/needed death metal adjectives that you’d like to throw at it. Following up a debut that was 8 years old, it’s clear that time has done little to impair this band’s sense of brutal death metal mechanics.

Sticking to their forefather’s playbook, much of Formed in Disgust harkens back to early Cannibal Corpse and Suffocation-esque displays (and a bit of Deeds of Flesh). There not a moment where they relent in the well-timed 30-minute runtime, with straight ahead and heavy riffs (laced with just enough modern technicality) being the centerpiece on which the band rests, with forays into more frenetic speed runs and blastbeats alternating with chugging brutality and NYDM-styled breakdowns. Rounding things out with plenty of near-gurgling vocals and a number of intro samples, it works as both a modern brutal death metal piece as much as it does an early ‘90s type. But there’s one thing that genre fans are going to love, and that’s the bass. Gleefully present, there’s no venturing into Beyond Creation/Obscura territory but boy is it noticeable, and a welcome addition to the malicious preceedings.

Falling nicely in line with the rest of the Comatose Music family, Atrocious Abnormality takes everything you love about brutal death metal and sticks with it. The audible bass lines are a very nice touch as well. For those seeking plenty of aggression and primal fury, you can’t go wrong with Formed in Disgust.