AthanaTheos – Prophetic Era (Or How Yahveh Became the One) (Lavadome Productions) 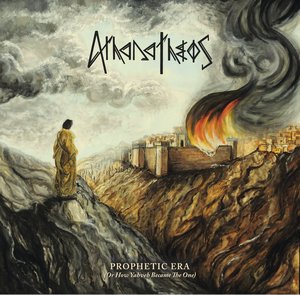 There is a terrible irony those who practice militant atheism, that by the context of their message, they remain affixed within a cosmogony of “God” – whatever that god may be. Granted, that is not unique to atheistic pursuits, it runs rampant across most of the transgressive metal genres, particularly within death and black metal, where opposition to one faith or another is ingrained in the DNA. I digress, as this is an overly elaborate setup to a functionally overly elaborate concept album from the French death metal (a first for me, I believe) group AthanaTheos.

Prophetic Era (Or How Yahveh Became the One) seethes and simmers with progressive leanings and occasionally indulgent run times, and if the elaborate lyric sheet is followed, is an equally indulgent examination of the historical underpinnings and institutional growth of Christianity. No small endeavor, but it is a convoluted story served through uneven and disjointed songwriting that leaves much to be desired. Not disjointed in the comically progressive “kitchen sink” sense but, in considering opener “Samaria”, it is a journey without a conclusion, an army circling a fortress without attacking it. There are tangible differences between the parts of the song but as the near 11-minute run time comes to an end, it amounts to a lot of churning water and little forward momentum.

In “Paradigms”, the shortest offering, though the song veers between stop-start sections and more blasty fare, it does not make for particularly engaging listening. The music, in general, seems somewhat out of sync with most modern death metal and perhaps its long history under several monikers offers insight into this – it carries a consistent early aughts feel – boilerplate and sparse, despite its progressive inclinations. There is something to be said for the commitment to the approach the band takes, especially over two decades. “Jerusalem (The Exile to Babylon)” is both the most engaging work here and the most tightly written, with a spiraling melody across its back half with a very satisfying conclusion. Given continuity across AthanaTheos’ discography with previous work by its members, if there is a springboard for album #3, I would hope it is this track.

Prophetic Era contains a weight concept but does not bring the goods musically to back up that concept. I suspect that there is a niche audience out there, likely drawn to its historical focus and the elaborate concept in play. By design it is not a flashy listening experience and frankly often feels significantly longer than its 48-minute run time. I can and do appreciate the enormous amount of effort and ambition that goes into realizing a project like this, which renders how unengaging it is all the more tragic.