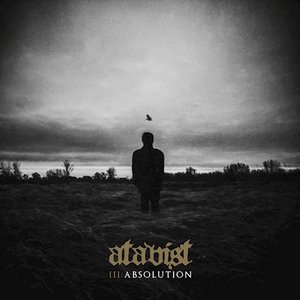 Admittedly, it has been quite some time since the world has heard from Atavist. The UK doom act released two albums in the mid-00s, and it’s been all quiet ever since. But the 13 year break is officially over with their third album in Absolution. It’s a conceptual release that spans from the idea of loss to recovering from it – not exactly happy grounds to cover. So if you were a fan and thought that the wait between albums was soul-crushing, just wait until you hear the music itself.

The sense of longing and despair that opens up with “Loss” is immediately palpable. It’s a drawn out and slow beginning, and as the strings (Jo Quail on cello and Bianca Blezard on violin/viola) start to appear, it’s all the more gut-wrenching. There is such a heavy emotional weight to the music, yet the strings give it this serene and breath-taking feel. To the point that when the guitars and tortured screams kick in, it’s near-overwhelming. It’s an incredibly powerful opening, and the 16-minute track oddly never loses that momentum. It’s a fantastic view of grief. But it’s not over, and don’t expect the same feeling to carry onward. The shining star of Absolution is that the mood shifts over the course of the album. From that initial despair, into something grittier and more abrasive in “Struggle,” while still carrying that dirge-y weight to it. “Self-Realisation” seems to intensify those feelings, but bring them into a more cinematic vibe (the bells in the background add a nice, haunting touch). The murky tone sets it up as one of those ‘darkest times before the dawn’ feelings, and the final act, “Absolution” offers a slight beacon of hope. There’s an atmospheric beginning to it, in keeping with that cinematic feel from “Struggle,” but it removes some of the dense weight. In keeping with the title, there’s a bit of release. It’s not all flowers and sunshine, but it provides a bit of inner peace as the track lumbers onward. The melodies are still morose, but there’s a sense of the lifting of spirits – someone in part due to the synths and strings, giving those last few moments a feeling of closure and a small amount of relief.

Best experienced in a whole sitting due to the atmospheric vibes and sense of continuity, III: Absolution offers a poignant view of loss and eventually moving past it. The lush and genuine feelings the album evokes make it a real showstopper, and ultimately a relatable one in the end. It may have been a while since Atavist made their mark, but they are definitely ready to make another one with this album.