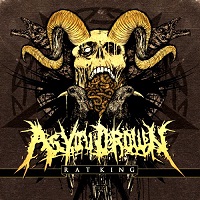 A Scandinavian band aping American metal is usually cause for concern. It never works; it’s usually the other way around, and not even that works as much as it used to. Some bands are better off paying homage to their homeland, something Sweden’s As You Drown should consider, for this nine-song offer reeks of modern American death metal. If it had a fragrance, it would smell. And rats usually do smell. (Disclaimer: Blistering has never owned a rodent, but will make the assumption that rats do in fact, smell.)

Rat King (the band’s sophomore effort) is essentially a rehash of everything Job For A Cowboy, The Red Chord, and Whitechapel have been doing the last five years. JFAC is the most prominent reference point (props to this scribe’s stepbrother, though), as the Swedes quickly become infatuated with a swirl of go-nowhere-fast riffs that blend together and fail to leave an impression. And when paired with Henrik Blomqvist’s relentless bark, it becomes faceless death metal rather quickly.

Naturally, the production is big and bright, with everything as crystalline as can be, which does give the album some extra weight. If it helps with anything, it’s during the staccato stomp of “The Nothing” or the technical minefield of “Bleeding Structure,” which manages to pull together some ideas that Cannibal Corpse wouldn’t be afraid to try on for size. Beyond that, trying to find any golden nuggets here is quite the arduous task. Good thing it only clocks in at nine tracks.

A band stuck in a lose-lose situation, As You Drown instantly would have been lampooned as a Dismember/Entombed soundalike should they have gone the Stockholm route, so at least credit the Swedes for looking somewhere else. Yet none of it matters in the end, as Rat King instantly brings to mind the short-lived dominance of Myspace and dudes wearing skinny jeans trying to play death metal. Easy to smell a rat when that’s going down.