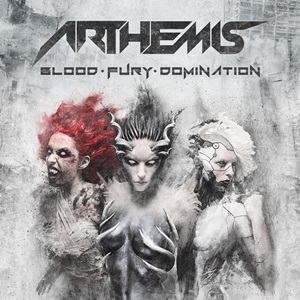 Since 1999 guitarist Andrea Martongelli has kept Arthemis chugging along- amid lineup shuffles and a bevy of label deals. In fact, this eighth studio album Blood – Fury – Domination is the second go around with Scarlet Records for the quartet, following a one-off in 2008 for Black Society. Probably the norm given the melodic power metal template of Arthemis stylistically – straddling everything from modern to semi-thrash nuances to establish their own take on the genre. Digging into these eleven tracks you’ll find serious attention to musical hooks and focused arrangements – most of the cuts geared for radio-friendly times as nothing exceeds five-minutes folks, very Euro-metal oriented with occasional squeals and effects at home to most modern rock listeners.

Andrea possesses superior axe knowledge and fires out heroic flashes during the double bass driven “Black Sun” and up-tempo “Blistering Eyes”, material that goes down a storm with Firewind and Mystic Prophecy followers. An almost Megadeth thrash-like intensity makes the verses for “Warcry” electric to the charge, the chorus from vocalist Fabio Dessi a rallying cry where measured rhythmic action intensifies the musical background. Fabio can hit some killer high notes, sustaining the melodies in the best manner possible, right up there with the best in the power field – while also reigning things in a bit for the tender ballad “If I Fall”. Going for a bit of the Latin American percussive nuance during “Firetribe”, this track also contains some of Andrea’s modern guitar riffing that straddles Soulfly meets Pantera, the lead break containing frantic squeals against the Yngwie-arpeggio licks while distant computerized vocals appear during the conclusion. The record in fact appears to be less power metal and more modern towards the second half, which could be a blessing for diversity but also confusing for others – because as catchy as “Inner-Fury Unleashed” is, the nod to Nickelback in terms of a shuffling riff/chorus and rhythmic patter between main and background vocals seems blatantly apparent, and gets a tad monotonous.

Arthemis probably will never be an upper echelon act in this fairly sizeable power genre, but if they are content to sit in that melodic/catchy corner as on Blood – Fury – Domination, they’ll carve out a decent niche audience.