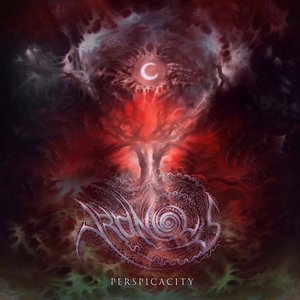 To this scribe, the ‘more is more’ approach is typically one that gets associated with symphonic metal, in terms of the arrangements and trying to squeeze in as many layers as possible. But in the ever-evolving tech game, we are starting to see this more in the extreme side of heavy metal as well. In this case, being more technical and trying to up the stakes in delivering the most extreme and jaw-dropping musicianship. Something that Perspicacity really personifies, unfortunately.

That said, there is some absolutely spellbinding musicianship at hand. Pick any given track, and you will bear witness to some extraordinarily nuanced and impressive feats of musicianship. The riffs are brutal yet decidedly intricate, the bass work can be showcased in its own right, and the drumming smartly avoids relying on blastbeat battery. For those seeking the most jam-packed, explosive tech death around, they will absolutely love Perspicacity. But for those outside that spectrum, the release will fall short. The reason is mostly due to the sheer length of it all. 60-minutes is a long time to sit and listen to music. A release needs to really have a number of tempo changes and diversity as it progresses. You will not find that here. Much akin to more brutal or slamming death metal efforts, you are hit on the head with technical riffing and it doesn’t stop often. There are two instrumentals in the middle of the album, probably with this thought in mind, but it doesn’t offer as much as a reprieve as one would hope. This makes the second half of the release a real slog to get through in a single sitting, which is a real bummer considering the obvious wizardry when it comes to the instrumentation.

Perspicacity lacks the playfulness of a band like say, First Fragment, which due to its runtime will force listeners into one of two camps. For tech-heads, this is a release that many will simply worship due to the dizzying songwriting chops and they will dissect down each note. But for the more casual fan, there’s just too much there and it ultimately brings it down a few notches. It provides an example that ‘more is more’ often isn’t the strongest solution.