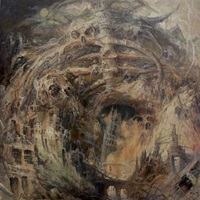 Originally developing as a side project during Arch Enemy down time, guitarist/vocalist Christopher Amott reignites Armageddon following his departure from the Swedish melodic death veterans in 2012. Considering the tightrope walk between melodic death and power metal previously explored on their 1997-2002 output (second album Embrace the Mystery a personal favorite) and a relocation to the East Coast of the United States as a home base means we have a brand new lineup to fill out studio effort four Captivity and Devourment.

Wasting no time in terms of establishing their attack through a relentless picking/blast beat opening sequence, the title cut slithers through a mid-tempo arrangement that features the exemplary death riff action from Amott and fellow guitarist Joey Concepcion plus the impressive bellowing roar of Matt Hallquist, as he switches up between Christian Älvestam (ex-Scar Symmetry) growls and blackened screams. The song also features ripping lead work at two different times, allowing fans of neo-classical oriented arpeggio runs a shred-tastic, horns up good time. The follow up “Locked In” has a doomy, groove oriented main part which should hook many listeners from the get go, almost in a Nevermore-ish way, drummer Márton Veress navigating classic metal percussion elements with solid fill skills a la Van Williams.

Of the course of the next 8 tracks, Captivity and Devourment circles the wagons between death and power metal – the lead breaks of course gaining huge kudos while the harmonic passages for “Rendition” and “Equalizer” should tickle the aural highlight reels. What is desirable about Armageddon’s attack is that amidst all the technical prowess is a down to earth sensibility, maintaining grooves and hooks for the average listener to retain and follow along, an asset in a sub-genre where people sometimes forget about overall songwriting. Add in the acoustic instrumental flurry for the 2:17 “Background Radiation”, Chris’ decent clean melodic vocals throughout as perfect contrast (check out his a cappella part half way through the heavy-handed “The Watcher”), and you’ll get a fine 44 minute record that I’m sure will align well to fans of the heavier power sector as well as Arch Enemy mavens.

Given at press time Matt’s exit from the band, let’s hope Armageddon can find as equal a versatile death voice to front the quintet – because Captivity and Devourment proves Christopher and the membership for Armageddon will have little trouble re-establishing themselves in the metal scene as a professional, aggressive force.