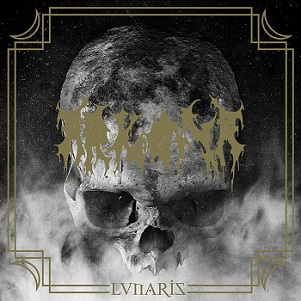 Almost feel like someone should slap “(Poland)” next to this Arkona’s name in order to avoid confusion with the Russian version. While the sonic differences are many, “Arkona” is not a name often bandied about considering it’s the word for a religious center that brought together Slavic tribes. But we’re splitting hairs here. The Polish Arkona have been active since 1994 and have released a handful of albums in their native tongue. After signing with indie stronghold Debemur Morti, Lunaris figures to be their first release to have any kind of global visibility.

Unlike the Russian Arkona, the Polish Arkona play a pretty hardline version of black metal. You’d think because of their Polish originations there would be some conniving dices and slices, but a good chunk of Lunaris runs through the regularly-treaded territory of blast attack BM. The band often relies on singular speed-picking runs for their riff selections, the most effective tandems being on found on “Śmierć i odrodzenie” and “Nie dla mnie litość” in particular, the latter finding drummer Zaala wreaking havoc on the meter. “Lśnienie” works in a balanced atmospheric glide (more speed-picking, though), but it’s the marathon crash and collide of the title track that effectively seals off an album that is utter BM annihilation.

Not sure if there’s going to be market confusion over the two Arkonas (the Russian version has enjoyed more success and are on a bigger label), but there’s no mistaking which Arkona has the extremity edge. Lunaris is thoroughly uncompromising…let’s just hope no happy, nature-loving folksters don’t get their Pagan knickers in a twist if they think the Russian Arkona has gone black.