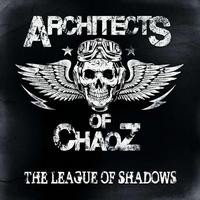 The solo career of former Iron Maiden singer Paul Di’Anno is the total definition of “mixed bag.” Sacked after the band’s tour in support of Killers in 1981, Di’Anno had mild success via his Battlezone and Killers outfits in the 80s, but then retreated to the club circuit to perform songs from the first two Maiden albums. In other words, he’s never quite been able to shed his past, no matter the flippant occasions when he’d badmouth Maiden. (Such a dichotomy.)

Perhaps in a way to get back under the safety and umbrella of a tradition band, Di’Anno enlisted a new batch of musicians to comprise of Architects of Chaoz. Its members are culled from – where else? – Di’Anno’s touring band, although a Maiden throwback to ’81 this is not. The band’s The League of Shadows debut is a surprisingly full-bodied, almost modern, but not quite affair, with Di’Anno turning in a quality performance, showing that he’s not the total bar-brawling vocalist everyone makes him out to be.

The potent rumble and dive of cuts like “Rejected” and “Horseman” (love those Di’Anno highs at the end) feature an array of twin-guitar tradeoffs, occasional double-bass bursts, and chunky, but not dumb riffs. The quasi-balladry of “Switched Off (Released)” gives Mr. Di’Anno some flexibility in which to stretch out those soft, underused vocals chords (think Maiden’s “Twilight Zone”), ending up as the album’s deepest – and best cut. Elsewhere, the spirited lead single “How Many Times,” along with “Dead Eyes” and pure power metal “When Murder Comes to Town” are nasty, street-ready songs, especially the latter, which contains more excellent singing from Di’Anno.

The band name may be a tad dodgy, but the proof is in the songs: Architects of Chaoz are one of Di’Anno’s more legitimate ventures of late. We could see why his retirement plans have been postponed – The League of Shadows is worthy enough to take on the road.