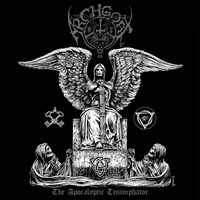 A contrast to the normally broad, expansive (and reliable) releases unearthed by France’s Debemur Morti, Finland’s Archgoat serves as a reminder of how simplistic and single-minded certain forms of black metal can go…or not go. No doubt the band relishes in their “kvlt” status of the perverse (cue mildly disturbing audio clips of animals being slaughtered. Yikes), but there’s no real lasting shock value in such a thing when the music fails to go beyond elementary Hellhammer and remedial Sarcofago. Such is the plight of their third album, The Apocalyptic Triumphator.

Contextually, no one is expecting full-range mobility in the riff department in primitive black metal. Hence, the tag “primitive black metal,” yet Archgoat doesn’t offer much – or anything – in the variety department in relation to their riffs. The bulk of the album consists of one singular, driving, root-chord tremolo riff that if you’re really not paying attention, sounds as if it’s recycled in each song. Occasional runs of variation pop up with some doom sprawls on “Those Below (Those Who Dwell In Hell),” or the nice bass build-up found on the album’s closing number, “Funeral Pyre of Trinity.” Then again, the album is so linear one might not even notice, and that’s even with a pre-determined “Side A” and “Side B.” The band should have made better use of the format…

Granted DR wasn’t there when Archgoat were hammering out the tunes to comprise of The Apocalyptic Triumphator, but given the lack of enthusiasm and excitement found herein, it’s as if the Finns just phoned this one in, hoping their status will bail them out. That could be the case with other folks, but here, the whole thing feels uninspired and flat. 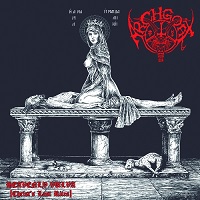