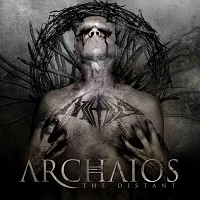 Glad someone remembers Gothenburg melodic death metal pre-1996. And it’s a band from the Dominican Republic no less, although this isn’t your thrash-in-the-gutter because-we’re-from-a-Third-World-country metal ala early Sepultura. Rather, Archaios is a high-class melodic death metal machine, popping out an album in the form of The Distant that totally recalls the nascent works of Dark Tranquillity, In Flames, and for a left field choice, Naglfar circaVittra. You don’t need to be a Rhodes Scholar to figure this is masterful stuff then.

The band’s attention to detail is a marvel, lending credence to the notion these guys probably tracked down bootlegs of The Gallery and Lunar Strain and studied them note-for-note. It definitely shows on some of the more exotic melodic portions heard on the title track and the excellent “Gathering the Silence,” where magnificent warp-speed tremolo picking of the melodic variety is a show-stealer.

It’s not all speed here, as “Legions (In Remembrance Of…)” proves. A mid-tempo romp with sci-fi

keyboards in the back (tasteful ones, though), “Legions” emerges with the album’s most melodically-jolting moment in the chorus. On the flip-side, some traditional death metal elements allow “Until Lightning Strikes” and “Approaching Of My Demise” to be full-bodied and agile, especially the latter which closes with a climatic keyboard outro.

We’ll surely be expanding upon the Archaois story in the near future, for apparently, they’ve endured more struggles than any regular band should. All this makes The Distant even more impressive. A top-flight album from a band that has every right to be known an international scale, Blistering cannot speak highly enough of this body of work. One of the best melodic death metal albums of the year, hands-down.