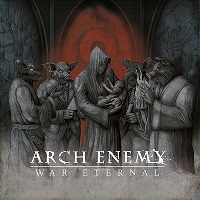 Admittedly, it’s been a while since Arch Enemy was a band to get excited about.  Coming out strong during the Liiva years and then carrying into Wages of Sin and Doomsday Machine, with the past few efforts it seems like the band was coasting off of their previous successes.  If you think long and hard about it, what’s the last great fist-pumping Arch Enemy song you can think of?  You have to go back a good ten years right (“Nemesis”)?  Well, worry no more, as the new blood that has been injected into the band has sparked a creative fire that sees Arch Enemy at their best and most inspired in some time.

While the biggest concern most had about Arch Enemy moving forward is how Alissa White-Gluz would impact the band (don’t worry we’ll get to it eventually), it seems the world has forgotten that Christopher Amott had again left the band in 2012 and this is also the first recording to feature Nick Cordle (formerly of Arsis).  The Cordle/Amott combination sees the band just as capable of flashy solos (“On and On”), headbanging riffage (“Never Forgive, Never Forget”), melodic noodlings (“You Will Know My Name”), and somber instrumentals (“Graveyard of Dreams”).  Certainly not any new territory for AE, but there’s a definite zest in these tracks that have been missing in the last few albums.  Adding to the flavor is some orchestral backings on a few of the tracks.  “Time is Black” being the strongest example of this, the symphonics are tastefully added and never go overboard with the theatrics, merely giving some additional character and backing support to the song.

Alissa White-Gluz is all over the spotlight with her entrance to Arch Enemy and frankly, its time she got her due.  Anyone familiar with The Agonist knows her range and capabilities and she brings her best screams to Arch Enemy.  A more than apt replacement for Angela Gossow, she is immediately identifiable and brings her own flair to the mix.  Her screaming range is a bit more diverse, and she brings some visceral punch to tracks like “As the Pages Burn” (one of the stronger choruses too) and “You Will Know My Name.”  For those wondering if White-Gluz would bring her excellent clean vocals to Arch Enemy, you are out of luck.  With the exception of the chorus of “Avalanche,” which effectively features some sung vocals layered with screams, you won’t find her singing here.  Take it or leave it (though it’s easy to wonder how it could weave into the band’s sound in the future, so much potential).

Arch Enemy have successfully moved past the departures of Christopher Amott and Angela Gossow and emerged stronger than ever.  If you have dismissed and/or ignored Arch Enemy over the past few releases, there’s no better time to give them another shot.  Welcome back to the big leagues guys (and gal)!