Apocryfal – Aberration of Mind (Self Released) 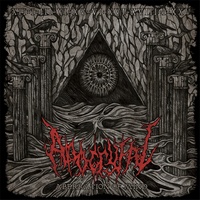 To be fair (or unfair, who’s to say), it’s due to a lingering obsession with the video game Contra that this one ended up in the review bin. Something about that game always brought me back for more, and despite the fact that it doesn’t seem that the song “Contra” has anything to do with the video game it shares its name with, it has been keeping me coming back for more as well.

Aberration of the Mind is the initial EP of Apocryfal, though you may not think so when you hear it. This is thoroughly entertaining, thick and crunchy death metal of the highest order. There is just enough old school appeal (which thankfully never appears as too slanted towards one country of origin) to keep them from being labeled “technical” or “deathcore” yet some modern influences shine though to keep them out of the retro-clone wars. To simply avoid labels, this is death metal through and through. Crushing guitars with actual riffing on display to insure that you listen to it more than once. The vocals are also one of the better pieces of the band, as the vocals are quite upfront (without dominating the mix) and have a very Gorefest feel to them that is suitably intense. The tracks run through at a blistering pace, with “A Theist” and “Mother of All” being standouts with their mixture of frantic speed and memorable moments.

Benefited by the Dan Swano mastering job, Aberration of the Mind is quite the professional affair. It can be argued that it doesn’t cover much new ground, but it’s executed at the level that any fan of death metal is going to get a grin on their face listening to this one. At 5 tracks, it’s a bit of a tease, but keep an eye on these Finns, this is a promising start to a potentially killer band.