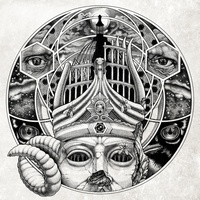 Sometimes there are gripes about how far the technical aspect of death metal has come, and something has been lost in terms of its “soul.” Admittedly, the reach to technically wow the audience with progressive slants and spiraling riffs can feel cold and distant from time to time. But don’t tell that to Ottawa’s Antlion, who have delivered one of the more interesting and varied pieces of progressive, technically-inclined death metal of the back-end of 2015 with The Prescient.

What’s most interesting about Antlion are the number of different approaches and angles that they try to squeeze in, all while maintaining a chemistry and consistency from start to finish. This is forward-thinking death metal, with nods to some of the best in this category from time to time. There’s the playfulness of Gorod, atmosphere of Fallujah, and progressive leanings of Obscura for starters. We could play the reference game, but it tends to diminish what Antlion has managed to do on their debut album. Occasionally, they’ll really push the melodies to the forefront, like the stunning “A Seer’s Energy,” which has some lavish atmosphere and gorgeous riffs, but they aren’t afraid to ramp up the intensity with cuts like “Hubris” either (even if it still maintains some stunning progressive moments). There’s some softer, acoustic-led moments like the intro to “Cycle of Failure” as well, all leading back to the idea that Antlion never goes the predictable, generic route. The songwriting skills here speak of a much more veteran act. It’s all tied together by a fantastic sound and production, which was mastered by Zack Ohren.

Tech-death fans should rejoice over The Prescient. It takes all the progressive pathways that have been successfully used over the past few years, and ties them all together in a glorious death meal bow. And as a first-offering, it’s genuinely exciting to see where they will head to next.