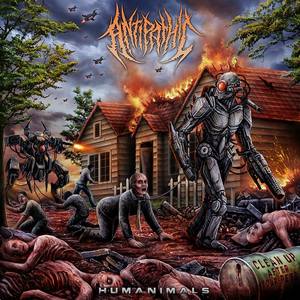 In all seriousness, the play on words that is the album title here is what made the decision to grab this one and place it in the review pile. In the brutal death metal game, one has to find an edge somewhere, even if it’s just in an attention-grabbing title (even if it does bring to mind Cattle Decapitation’s Humanure). Unfortunately, the music backing it doesn’t quite measure up to snuff.

A whole lot of brutal death metal presides over Humanimals, with some slam elements finding their way into the mix. So when the band is going all-in, the result is punishing. There’s the churning and monstrous guitar tone that gives the music plenty of weight, low gutturals that sit way in front in the mix (as some slam bands tend to have it), and frantically assaulting drumwork. The problem lies in a few areas. The first, and most notable, is the song lengths. Many tracks are 1-2 minutes in length, and some just don’t feel like songs in the end. You are grinding away, and then the track suddenly ends. Some fleshing out of the songs could do them a world of good in the future. Some uninspired soundclips also take up a good chunk of the timeline (though they do at least convey a theme). Most notably on the finale, “Cognitive Dissonance,” where a short intro leads into several minutes of fuzz until the guitars kick in at about the 5:30 mark. But by that point the track has lost momentum, on what should be the strongest point – finishing on a high note. Instead it limps to the finish line.

Antipathic are just as brutal and energetic as any other band in the scene. But with songs that feel incomplete and too much time (out of a 30-minute total) spent on samples makes it feel less than compelling. Maybe next time.