It’s been a long and strange journey for Antimatter over the years. What began as a direct off-shoot of Anathema during their transitional period has become the solo vehicle for Mick Moss and perhaps all the better for it. His penchant for the actual ‘song’ writing aspect of the band, married in days of old with the experimental and expansive stylings of Duncan Patterson, is at the forefront here; no unnecessary meandering or explorations even in the longer songs. Fear Of A Unique Identity is by no means illustrative of the band in the modern day, far from it, in fact.

Dark-rock not too far removed stylistically from Katatonia/similar is the focal point on display nowadays. Unlike the Swedes, however, there are no metal tinges, for aside from the super light use of double-bass in “Firewalker” the heaviness is all of a thematic-sort, not sonic. Melancholia has always been Mr. Moss’ stock-in-trade and it’s delivered in spades here, whether on the more upbeat (relatively) numbers like “Uniformed & Black” or the slow jams like the stellar album centerpiece “Here Come the Men.” The songs are follow similar tempos and lengths, but for the most part manage to avoid trending monotonous.

It’s fascinating to take this album and compare it with the Patterson’s Alternative 4 release from a couple years ago, if only to see how each release reflects parts of Antimatter’s past. The early albums were an uneasy tension of the succinct and the experimental (Moss’ loving songcraft especially prevalent in the live release Live@K13), so seeing Fear Of A Unique Identity wrapped up purely in Moss lets all that is great about Antimatter shine through in the spotlight. The songs are focused and haunting, the spirit of Antimatter living on in a new and fantastic form. 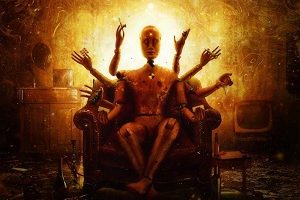