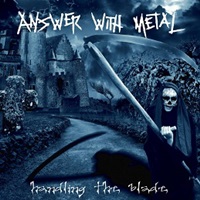 Born in 2008 from Stouffville, Ontario in Canada, Answer With Metal is a quintet that pump out traditional heavy metal (seems commonplace up there these days). Although releasing a few EP’s and a debut, self-titled album in their discography, the second full-length Handling the Blade is this journalist’s virgin foray into their style. Keys to victory remain simple: strong riffing, proper twin guitar harmony employment, decent tempo/groove offerings and a singer who can command attention through power melodies and killer screams.

A lot of the requisite elements are delivered in passionate and convincing manners throughout. A healthy serving of Iron Maiden and offspring such as White Wizzard, Enforcer, and Omen come to mind easily when taking in the heads down double bass and churning riffs for “Marked for Death” or the almost 6 minute gallop-ish title track. The triple bass/rhythm/lead attack from Jon Stallan, Matt Hadaway, and Andrew Jarvis carries the bulk of the band’s sonic appeal, especially within “Gates of Hell” where you feel this battle charge of energy come from the quick hitting string interaction and equally exciting instrumental sections. The band also switch gears for a more commercially oriented number like “Electric Woman” that has a main riff not dissimilar to Jake E. Lee-period Ozzy if taken through a Cauldron cleanse.

Where Answer With Metal may struggle to gain full appeal to a critical traditional metal audience could be the particular delivery and specialness of singer Dan Nielsen. In lower pitches, he has adequate attitude and proper control – it’s just the times when he tries to belt out higher Dio/Dickinson oriented screams within say “The Plague” or the Priest-like “Tomb of the Unknown King” that has this journalist thinking that a bit of voice coaching would be helpful to smooth out some of the shrieking or glam-oriented aspects. Sickles, skulls, and castles are three more clichés for the cover that the band can check off the bucket list for proper credibility – and the production is equally attune to natural sounds without much studio manipulation.

Not quite to the Skull Fist/Unleash the Archers level of professionalism, Answer With Metal are the type of band that could rile up patrons in a decent opening slot club situation. Let’s hope the singer situation smooths itself out if they desire to climb the popularity ladder.