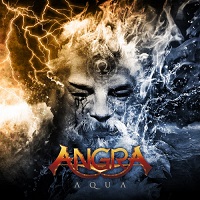 Boy, 2006’s Aurora Consurgens feels old, doesn’t it? And since it didn’t have the flair of its predecessor Temple of Shadows, Angra suddenly isn’t the enticing, 3rd World power metal prospect they always were. If the Edu Falaschi era has proven anything, it’s that Angra are infinitely heavier and more technical than they’ve ever been, but that doesn’t always result in great songs. For Aqua, it’s more of the same – just a notch below the band’s unmatched Andre Matos days.

A concept album based around Shakespeare’s The Tempest, Aqua continues in the upward, progressive bent that started hanging around with 2001’s Rebirth. For starters, Falaschi has his share of hummable, memorable moments, namely the closing swoon of “A Monster In Her Eyes,” as well as the chorus to lead single “Arising Thunder.” Still, the man can be awfully shrill at various points (ref. “Spirit In the Air”), which depending upon who you ask, is either part and parcel of Angra Mach II or a deterrent. We’re on the fence.

Some salsa/ethic elements are peppered in throughout practically every song, a hallmark that continually separates the Brazilians from their contemporaries. The pomp and bombast of “Awake from Darkness” is a winner thanks to lead guitarist Kiko Laureno’s solo work (good to see longtime drummer Richard Confessori back in the fold too), while the sprawling “Rage on the Waters” and dark “Hollow” emerge as standard-bearers for this period of the band – more rigid than the Matos days, but with enough gusto and finesse to ultimately prevail.