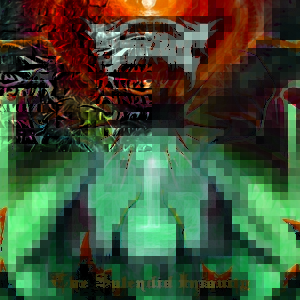 In skipping past the 1-minute instrumental “Black Epoch” and diving into “Eternal Unrest” it takes all of about 2 seconds to figure out what Angerot will be up to over the course of their debut album, The Splendid Iniquity. That thick, buzzsaw guitar rolls in like a beast and the album simply takes off from there.

Everything from that explosive moment seems to fall directly in line with any other old school Swedish death metal band. To their credit, it’s all done with plenty of flair – the melodies are solid enough, the buzzsaw is definitely prominent and ear-catching, and the vocals are quite intense and brutal (in fact almost pulling towards the band’s homeland of the USA. The band’s SweDeath feel is entirely genuine, with them pulling out all the stops, from a mix by Tomas Skogsberg himself at Studio Sunlight, to guest appearances by James Murphy and, you guessed it, LG Petrov. While these things add some color to the band’s arsenal, it’s quite clear that Angerot is about worshipping the old ones, as opposed to evolving from them. Though as stated, they have clearly learned all there is to know about the genre. Just check out “Rivers of Chaos,” which is a downright ripper of a track, from the fiery leadwork and brutal speed to the equally intense grooves that give it some dynamic.

While you might not find much in the way of innovation, those seeking yet another old school Swedish metal fix are bound to salivate when they hear the genuine approach that Angerot brings to the table. The Splendid Iniquity is explosive, and will certainly make you forget that the band isn’t from ‘90s Sweden but South Dakota.