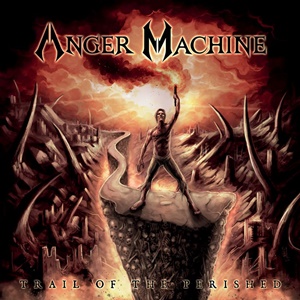 Founded in 2015 through musical academy work, Anger Machine reside in the Netherlands and released their debut Unbreakable EP in the fall of 2016. Going through natural growing pains in terms of recordings, they released a single “Warpath” a year later, setting the stage for this full-length Trail of the Perished. The quintet delivers a style that’s a groove/modern-oriented mishmash form of thrash, also injecting some old-school lead break traits to spice up the proceedings. Over the course of these ten tracks you can sense an affinity for many American bands that rose to prominence during the 1990’s and early 2000’s – meaning there’s plenty of burly riffs and hooks to treasure against the aggression and adrenaline that pours forth from the speakers.

Because the band place direct focus on groove metal throughout, it’s hard not to get caught up in the catchy riffing/tempo combinations right away in tracks like “Created to Corrupt” and “Vanquishers” – straddling the lines of Pantera, Lamb of God, and thrash acts such as Exodus or Slayer. Guitarists Thijmen den Hartigh and Martijn de Jong deliver sinister dual rhythms of a crunchy and staccato-oriented variety, musically enticing and biting as well be it through the heads down thrash-charge for opener “Disconnected” on to a bit more open, moodier interplay on the slower but still vicious “Red”. You’ll be hard pressed not to notice the forceful, vengeance-led voice of Tim Koole – twisting and turning aspects of modern metal, groove metal, and death/ hardcore when necessary, he has equal ability to be Randy Blythe-like one minute, and then turn on a dime to channel some inner Rob Dukes when the double-kick action slams home during “The Abominable”. The lead breaks give the listener some melody/harmony passages to latch onto while also incorporating some tapping/intricacies that showcase these musicians have serious training and chops behind them – “Conquer All” worthy of a devil horns salute.

Relying on a diverse approach that keeps the songwriting vibrant allows Anger Machine to separate itself from the pack of modern groove/thrash artists who are one-trick ponies. Trail of the Perished has equal footing for the younger generation to appreciate and the old guard to get plenty of entertainment value as well.