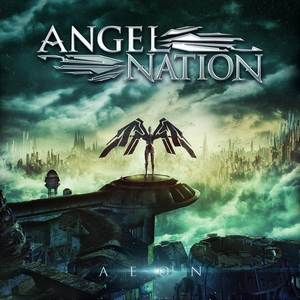 Some tend to think that the symphonic power metal road is one that doesn’t branch much. The charge led by bands like Nightwish, Xandria, and Within Temptation is one that is frequently followed quite often after all. But every once in a while you stumble across a band willing to veer outside the path. Angel Nation’s second release, Aeon, takes some of the mainstays associated with said acts/genre, but never feels bound by the same rules of the road, implementing instead some curveballs to keep it more exciting from start to finish.

Angel Nation come off as quite melodic, but still manage to capture a variety of feelings and emotions on Aeon. The biggest asset here is that each one of the songs that are presented feel unique. Of course, there are aspects that tie the album together, but there’s not the overwhelming sense of homogeny that you are hearing the same basic formula with each track. There’s heavier and softer elements, metal and rock influence, modern and retro vibes to be enjoyed through it all. You can take the more riff-centric and heavier approach of “Free” (with Jukka Pelkonen of Omnium Gatherum contributing some guest vocals) and follow it up with the extraordinary fun and ‘80s rock feel of “Enough is Enough” without batting an eye. Triumphant tracks such as “Wonder Who You Are” balance themselves with somber material like “Breathe Again.” The emphasis of guitar over synth gives the band a more individual take on some of the material, but still know how to use it effectively with songs like “Farewell.” Lastly, vocalist Elina Siirala (also of Leaves’ Eyes) herself gives the songs quite a bit of life with her operatic vocals. The easy standout in that regard is her gorgeous work on the gentle ballad “Music Plays” (with her mother playing violin no less), but she also is fully capable of commanding power when needed, as mid-tempo cruncher “Burn the Witch” displays.

It’s easy to talk about all the tracks when there’s so much diversity going on with Aeon. Lush operatic vocals, energetic riffs, and synth that knows when to slip into the background – Angel Nation come across as quite well-rounded and mature for only their second release. There’s some magic here that symphonic metal fans will have no problems eating up.