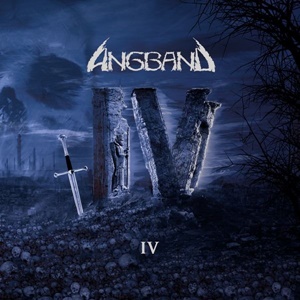 Iranian power/progressive metal act Angband have been a stable part of the Pure Steel/Pure Underground roster since their 2008 debut album Rising from Apadana. Injecting elements of Persian traditional music to the mix, it’s been eight long years since their last record Saved from the Truth. An easy way to garner that possible lost interest though is to add a key member to the mix – which is the case for IV as Pharaoh / ex-Control Denied singer Tim Aymar joins the fold as a seasoned professional, ensuring at the very least that the vocal presence will be top notch and memorable throughout the course of these nine tracks.

Beyond the trio’s standard electric compliment of guitars, bass and drums, Angband inject Persian instruments to provide that exotic atmosphere when called for – making “Visions in My Head” and “Mirage” two standouts in that regard, the latter also featuring a very soothing, reflective lead break from Mahyar Dean that builds into Gary Moore/David Gilmour-like activities. Stunted delay pedal effects give “Insane” that proper chaotic feel, before the heads down power riffs and sinister mid-tempo groove get the energy going. Ridged rhythms allow “Children of War” to be another standout, the heavier parts consistent with the battle theme, while the cleaner instrumental sections allow for some dynamic contrasts, including Tim’s rearing back and going for the money note screams. Although individual components of IV step into that professional angle, the weaker drum sound and very pedestrian performance from Ramin Rahimi keeps Angband in more of a burgeoning level status, as there’s a predictable or almost stiff aspect to “Atena” and “Cyrus the Great” that hopefully gets rectified on future recordings.

Not necessarily the fastest or heaviest group, Angband prefer to execute their material with a bit of that Rush meets Iced Earth/Blind Guardian-ish textures, along with the Persian cultural aspects that are obvious difference makers compared to the rest of the genre. IV just needs a little more free flow release for the musicians to not be so mechanical/rigid in their execution and we could hear a stronger final product.