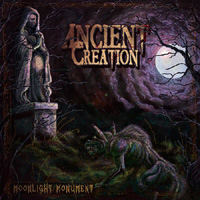 Independent record labels pride themselves on building up the profile of artists. I applaud people in today’s instantaneous/download-driven demographics who sign bands they believe in – irrespective of what dominates the market place. Take Ancient Creation – a five-piece traditional power band from Missouri who have been slugging out their wares since 2003. Their debut album Evolution Bound came out in 2007 on Dutch label Melissa Records, and here we have the follow-up on North Carolina’s Heaven And Hell Records.

Moonlight Monument gives the listener eight vocal tracks and the instrumental “At Dusk,” which for a change of pace does not perform as an introduction to the album but rather an acoustic interlude before the epic concluding title cut. Kudos to Peter Nisenkier who played double-duty of all rhythms and most of the lead guitar play on this second record. You can tell he cut his teeth on artists like Helstar, Yngwie Malmsteen and Leatherwolf, as songs like “Profane Destiny” and “With Anguish” throw down the six and seven string gauntlet for harmonies, melodies and occasional progressive interplay.

Vocalist Steve Bentley may not register with the same strength as a Halford or Dickinson, but on material like “Through Prophets Eyes” and the Annihilator-esque title track his chilling delivery recalls a montage of Lizzy Borden, lower register King Diamond and even the late David Wayne. There were times on Moonlight Monument where I wish drummer Mike ‘The Beast’ Burns would have been slightly more adventurous on his fill and double bass kick work such as the lackluster solo section of “Black Reflection” (he’s since been replaced by Kevin Keeton, stay tuned), but that’s a minor beef on this true, old school metal effort. I mean, even the Adam Lichtenauer production values keep the instrumentation at the forefront, with nary a trace of keyboards audible.

Overall, the domestic scene could use more bands like Ancient Creation to give power metal a swift rear end kick on the upside.