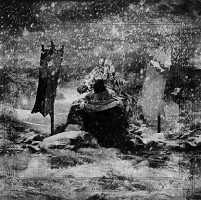 It is of comfort, at least partially, to just glide along with an atmospheric black metal album. Because black metal often frontloads itself with elongated peaks and valleys of extremity, the portions that are meant to provide dynamics (and also soothe when strolling through a forest) get lost in translation. It appears that one band has been paying attention to this, Finland’s Ancestors Blood.

Formed in 2002 under the name Lost Wisdom, the band has plotted a largely productive course, popping out a handful of demos, splits, and two full-lengths. Hyperborea (their first for the most-excellent Naturmacht Productions out of Germany) should rightfully be their full-scale introduction to larger audiences. By plopping down in lush, mid-tempoville and heightening the use of keyboards (think of Dimmu Borgir during their Stormblast period, or for a real unsung gem, early Gehenna), the songs found on Hyperborea are cold, wintry dives into the world of atmospheric black metal.

The cascading keyboard movements on “The Way of the Spirits” are truly momentous, providing a haunting, if not foreboding feeling. “Elegies” benefits from well-placed segues and breathing room (i.e. more keyboards), while the album’s biggest rumble and roll comes via “Rite of Passage,” where upon Ancestors Blood volleys between the melodic spacing of early Burzum, and the cinematic-crests of In the Nightside Eclipse-era Emperor.

In spite of such name-dropping on our end, Ancestors Blood doesn’t feel like a band who is the sum of their influences. Rather, there’s a clear and obvious reverence for the pacing, the feel, and the allure that atmosphere that black metal can bring. ‘Tis a shame more bands don’t explore such routes, but it’s all there for the taking for Ancestors Blood, who with Hyperborea, become a wind-swept black metal dream.