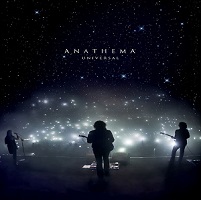 The last three years have been very kind to Anathema, this, after a well-documented period of studio inactivity from 2004 to 2009 that netted only a remake album (Hindsight) and nothing more. So with the momentum of last year’s well-received Weather Systems behind them, the Brits took to Bulgaria to record Universal, a full-blown concert film that showcases the band at their most grandiose and earnest. And since we can’t write anything about the band without mentioning their glorious early-career metal days: This should do even more to pipe down the calls for Anathema to make a sonic retreat.

Joined by the Plovdiv Philharmonic Orchestra, Anathema’s song-touch and dynamics become more heightened and Pink Floyd-like with such a backing. The opening “Untouchable Part I and II” combo seems to the proper way to start such a proceeding, as lead singer Vincent Cavanaugh belts impassioned vocals, with female vocalist Lee Douglas trailing not far behind. The top-notch “Thin Air” is momentous, while “Lightning Song,” the airy “The Beginning and the End,” dark “A Natural Disaster” and stadium-ready “Deep” had the throng on hand rightfully enthralled.

Professionally-shot with a multitude of camera angles, Universal is both intimate and grand. Considering how song-oriented and light some of these numbers (i.e. “Flying,” “One Last Goodbye” and “Deep”), Bulgaria, as well as the accompanying orchestra and dream-rock swivel make Universal the proper snapshot of Anathema in terms of where they are now, and where they’re headed. It’s quite obvious where that place is, and even if it’s farther away from where a lot of folks want them to be, Anathema is on a career arc like no other.