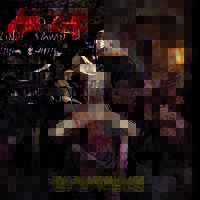 Plenty of old school death/thrash goodness awaits those who take the plunge into Peste Negra Muerte Negra. With some clear influences of Sarcofago, Slayer, and even old Sepultura in tow, Anal Vomit blisters their way through nine cuts of frantic material. The riffing stands out as the key to the band’s success, often relying upon really strong, ‘sure to induce headbanging’ riffs such as those in “A Savage Fornication” and “Valle de Tinieblas.” The type that tend to feel like a punch to the gut, in a strangely good way. The production gives it an older feel (as it should) and nothing feels overly soured by this approach. The only thing that holds the album back is a feeling of deja-vu as you start to push towards the second half of the disc. This feels like an album that should be closer to 30 minutes rather than 40.

While most of the material simply retreads the masters, it’s played with feverish energy and an abundance of gnarly riffs. Those who gravitate towards this style will undoubtedly be quite pleased with Peste Negra Muerte Negra, while those that are outside that classification may want to check out a track before proceeding further.