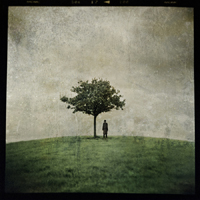 Long championed by our own Sara Heitman (much in the same way some of us on the staff are gonzo for Katatonia, Mono, Suidakra, etc.), Los Angeles-based Ana Kefr run smack-dab in the hodgepodge of metal crossbreeding on their second full-length, The Burial Tree. With a modern American and Scandinavian metal influence being front and center, the band uses the backdrop of labyrinthine song structures and an alluring lyrical scope to get their point across, which for the most part, they do.

There’s no real foundation to hold onto here – Ana Kefr essentially throw everything they have at you on this 14-song outing. And since the album’s production boasts a natural tone, the band’s “kitchen sink and then some” compositions (and occasional bout of sloppiness) can sometimes be a deterrent for the wealth of good ideas presented, most of which are presented, then tossed out at the drop of a hat. The band probably just gets bored with an idea, then quickly moves onto the next.

With an extreme metal current running through the bulk of these jams, there’s a smattering of dark passages that keep the needle moving, especially on “Thaumatrope,” which utilizes exotic instrumentation in the form of a clarinet and saxophone alongside pointy guitar riffing (in the much-lauded Euro metal fashion) and singer Rhiis D Lopez’s excellent clean vocal chants. Symphonic metal rears its head on the dashing “Parasites” and “The Blackening” while the more distilled and laid-back moments of “Fragments” reveal a melodic undertone that should be further exploited.

Without a proper reference point, bands like Ana Kefr are sure to give most metal journo’s a fit. This is quite unique, and it’s not unique for the sake of being unique, which makes The Burial Tree a captivating listen. When the band finally sows its elaborate musical oats and decides to get in bed with cohesiveness, then Ana Kefr should be a name we’ll be hearing a lot more of down the road.