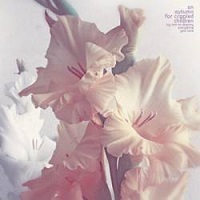 Of course, the name will get you right away, but there’s much more to this Netherlands-based depressive black/Goth combo than an eye-catching moniker. Fully immersed in the sub-buzz of BM but not sonically aligned with its standard sonic template (read: there’s a total absence of extremity), the band has come split off a lot of the pre-determined norms when breaking down metal that is oppressive and ultimately, bleak as possible. Thus, the band’s fourth album Try Not to Destroy Everything You Love moves in mysterious ways, but always comes back to where it belongs…at home in despair. (If you caught the Sentenced reference, then you’re really cool.)

Getting around the album’s muck is perhaps the only stumbling block across the ten cuts on hand (there’s virtually no clarity to any of the instruments), so when AAFCC presents a moment when you’d expect them to veer off into demonic BM land, they go for a melodic passage or usher in some jangly, near-new wave chords. The piano plucks and cascading guitar lines on “The Woods Are On Fire” might be the best example of this, with the band building a climatic number all within a short timeframe, with frothy, un-harmonious vocals leading the charge. Elsewhere, the synth-addled title track (which opens with soundtrack samples), and the gorgeous “Avoiding Winter” and gracefully purged “Starlight Spirits” are fitting of a somber stroll through leaf-strewn terrain, cloudy days and all.

One should not be deterred by the occasional uniformity that befalls some of AAFCC’s songs, for there’s usually some type of head-spinning nugget to be found in each. All this makes DR wonder how the band would sound with a proper production job, perhaps they’d be able to make good on even more of their ideas, but alas, Try Not to Destroy Everything You Love is a near-mandatory listen for those who are never quite satiated with metal’s darker brood. AAFCC is certainly among them now.