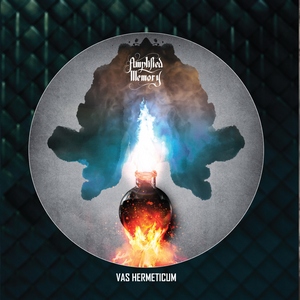 When one happens upon an act with the ‘melodic death metal’ tag, there is an assumption of how they will sound before hearing it. Many times, it’s up to the band in question to prove they are more than one simple classification. Something that Amplified Memory manages to do with ease, even if some of the transitions aren’t exactly smooth.

No question that Amplified Memory owes some of its existence to old school Gothenburg melodeath. The guitar harmonies, the dark yet melodic approach, and even the raspy vocals are all in order and perform the necessary functions to get the band off the ground and running. “The Aether Apparatus” contains plenty of galloping melodies and thrashy riffs that prove that the band can pen a catchy ode to the sound. But they aren’t quite satisfied at calling it quits there. Instead, they toss their progressive sensibilities into the arena. “A Walk on the Crystalline Path” loads up a saxophone solo in the middle of the 8-minute track. While it feels like it cuts the track into two segments, it’s nonetheless a cool injection. “End of Transference” adds some rather lively and tap room-esque piano to an otherwise blazing melodeath romp, but also suffers from the same odd transition. The ballad-esque “Ammon’s Eclipse” uses plenty of strings and synths (as well some female vocals), but then oddly erupts into a full-scale metallic assault. On the other hand, “Multipolar” uses a more atmospheric approach and ties it all together to create an interesting feel and one that is more smooth in transition.

There’s a lot to like about the effort Amplified Memory does to diversify their sound on Vas Hermeticum. While some off it leads to some strange transitions, they do hit a few of the songs completely out of the park. With a bit more smoothing out on the next album, they could deliver a real whopper of a release.