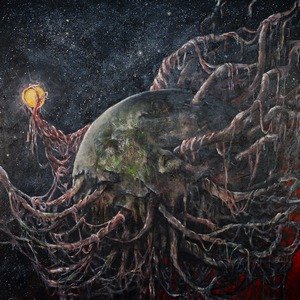 Canadian two-piece death metal act Altered Dead are back after 2016’s self-titled debut with their second effort, Returned to Life. The first thing that stands out here is the ugly, cosmic, and otherworldly artwork, and in this band’s case, it’s a near-perfect fit. Returned to Life is filthy death metal that is gloriously putrid.

The guitar tone makes a first impression after you get through a brief mood-setting intro, with a creepy and monstrous vibe that immediately lets you know just what you are in for. The band goes for the slow intro, but “Mental Suicide” eventually goes from lumbering and gritty into full-speed madness, and it’s here where the band really shows off that ominous and dark feeling. There’s something unsettling about the band when they are going at full-speed. Much like some other old school death metal bands as of late, there’s more of an off-the-rails/unhinged feeling that fills the air when they dive into blastbeats and muddied riffs. It makes the slower parts feel that much more rotten in turn, and Altered Dead are quick to flip the switch from unbridled chaos to a slow burn decay. You can all but hear the murk when they buzz in the mid-tempo (see the title track), and that slow and crushing riff in the second half of “…Of the Oppressed” is definitely going to give your neck a solid workout.

Blistering and disgusting in the best of ways, Altered Dead specialize in death metal that oozes yet rages like a monster. It’s pure-bred death metal that genre fans will greatly appreciate, as the band already seems to grasp all of the bells and whistles that make it work and keep it thoroughly bloodthirsty.