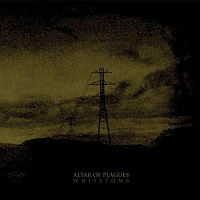 At times, White Tomb just floors you. Just like Isis did circa Panopticon or Cult of Luna when they’re not fucking around. Yeah, it drifts into metalgaze territory more than once and that’s fine, but that black metal smear gives it more of an edge than any of the aforementioned bands can be bothered with. White Tomb is ragged, apocalyptic (a word we could probably beat into the ground), and highly cinematic. Above all else, it’s an early career defining moment for a band just starting to take a peak out of its Irish homeland.

Conceptually, White Tomb details the endless beating planet earth (i.e. “White Tomb”) has taken the last several centuries and how mankind is content to let its treasured cultures and landmarks die. While it’s nothing new, the ferocity and utter conviction in which Altar of Plagues lays this out makes almost impossible not to latch onto.

Sonically, wow, I mean, this album is gigantic. Big drums, crushing, in-your-face guitars, and enough open space to make massive chasms in any soundscape. Plus, there are hints and dabbles of spacey, cryptic melodies in this four-song block (you guessed it: they’re all long) to allow it to hold up well over time.

Some black metal meanderings emerge in brief moments, usually captured in a frenzied blast portion or scathing chord structures. When the band is through with that, the tempo is pulled back and the storm clouds move in. Heck, even a noise/experimental section in “Watchers Restrained” works, and that’s usually the type of nonsense that kills albums like this.

White Tombs simply explodes the sonic boundaries developed by the metalgaze scene. It’s more than that, obviously and its tenacity and all-consuming apocalyptic aura will bring anyone down. Massive.