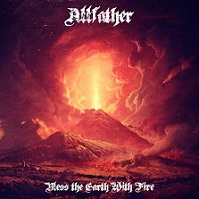 Have to love the low expectations Allfather set for themselves. Initially, all the band wanted to do was to “write a few songs” and “play a few shows that weren’t shit.” Talk about a low bar. But as it goes, when you set it low, keep hopes/dreams/ideas of glory to a minimum, it’s all gravy from there. Since their 2014 formation, the UK’s Allfather has popped out a handful of demos and EPs, culminating in the release of their first full-length, Bless the Earth with Fire, which is also their first output on a label. Surely that was a pleasant happening for the band, eh?

To the matter at hand, Allfather play a volume-heavy, identifiable brand of sludge doom that accordingly, veers between High on Fire and Corrosion of Conformity. While COC’s Southern boogie is not as strong as their High on Fire influence, the occasional trip through melody-land happens upon Allfather, like on “Dark Actors,” the album’s highlight cut. Then again, Allfather doesn’t cut through very well on the vocal front, as singer Tom stays within burly man/bearded dude bark territory. Yet the band passes the muster for the most part, particularly on “Death, and Hell Followed with Him,” a number that cross the 11-minute plane while honing in on some backbeat Sabbath riffs, and classic sludgery.

Nevertheless, Bless the Earth with Fire is very much a no-frills, hard-iron, meat-and-potatoes type of doom/sludge album, something that is rather common over on this side of the pond. And as indicated above, Allfather appear to be just a couple of dudes more interested in rocking out than trying to boost their social media status with shenanigans of the day. That counts for something.