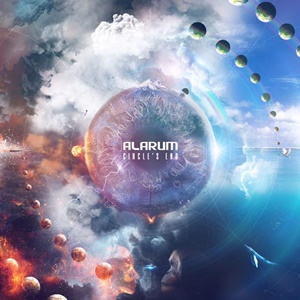 Gaining acclaim from domestic Australian acts as well as international musicians like Atheist’s Kelly Shaefer who contributed vocals to a cover of “Piece of Time” back in 2006, Alarum have been around since 1992, releasing three full-lengths and numerous demos. Relatively silent on the recording front since their Willowtip Records release Natural Causes of 2011, these progressive/fusion lads intertwine a mix of thrash, rock, and jazz influences for the fourth album Circle’s End – enveloping your brain matter with ten tracks of intricacies and left-field musical combinations. And yet they figure out a way to create song structures that contain tighter hooks and memorable moments against the obvious skilled interplay and adventurous musicianship carried throughout these tracks.

Stair step charging riffs and outer universe soundscapes make for some intriguing, alluring combinations. The vocals can also go from clean, Devin Townsend-esque serenity to forceful, semi-thrash rhythm-oriented combinations all within the same track as “Sand” illustrates with the right water/keyboard elements during the conclusion to make you feel alert and alive away from land. As guitarists Scott Young and John Sanders excel at layering their riffs and counterpoint measures with segments of circular catchiness and impressive buildups – Death, Cynic, Anacrusis, Watchtower all on their radar against some jazzy/fusion/rock dynamics to keep songs like “Syzygy” and “War of Nerves” razor sharp headphone excursions for deep dive dissection. Whether throwing down dizzying blast beat/dive bomb movements or calm/heavy juxtaposition elements, Alarum continually explores outer domains rarely heard in the genre. Be it in a shorter context under three-minutes for “Sphere of Influence” or the 79 second “Crystals” all the way through to the 8:32 closing epic “Sojourn” where the rhythm section of bassist Mark Palfreyman and studio drummer Ben Hocking get a chance to flex their technical chops against some serious shred lead breaks while the back half of the arrangement delivers calm light jazz ecstasy.

Alarum maintains surprising consistency in keeping the songs hook-driven and relatively uplifting/upbeat even against all the progressive/technical parts and combinations thrown into the universe for the listeners to absorb. Probably why this band has received critical and musician acclaim – as Circle’s End is a highlight for those who love pushing the envelope for thrash/death in that jazz/fusion field.