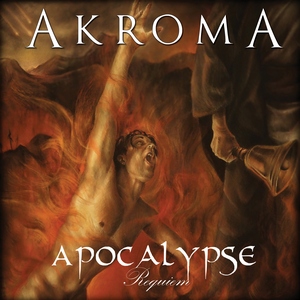 We’ve all had that experience where we observe something that is so great on so many levels, yet there’s that one, nagging and critical piece that keeps you from diving in further into it. The same thing can be said for Akroma’s Apocalypse [Requiem]. Lots of exceptionally well done pieces, with one damned component that renders the album far below its potential.

Symphonic black metal with operatic touches and occasional leanings into thrashy material is what the foundation of Akroma is made up of. Bombastic and epic symphonic arrangements that have a definite Fleshgod Apocalypse/Dimmu Borgir vibe without being called a copycat. The riffing is energetic and the bursts of speed help to keep it on the more brutal end of the spectrum. One of those symphonic albums that doesn’t lose any of its power due to flattened riffs, but instead piles everything into a cohesive blend. Additionally, they pull in some female operatic vocals/chants on a few tracks that give added flavor to the songs, without feeling obligatory or forced. So what’s the problem then? Unfortunately, it’s the vocals. The main vocal styling is that of a shrill, high-pitched black metal shriek that just feels overdone and far too dominant in the mix. To the point that you cringe on a few occasions when it begins. Some lower growls are tossed in without complaint, but these screams are really the Achilles’ heel of the album.

There’s so much well done material on Apocalypse [Requiem] that it’s a true shame that the vocals are simply not up to par. If the band can find a fix for this in the near future, it would be much to their benefit.