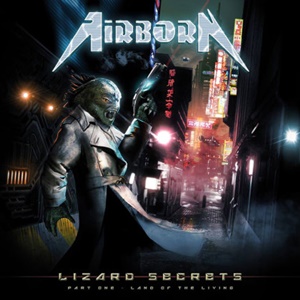 Active for 22 years, Italian band Airborn have released five previous albums, including a couple with Piet Sielck from Iron Savior behind the producer’s chair – beyond contributing to tribute albums for Saxon and Running Wild among others. Lizard Secrets: Part One – Land of the Living is this scribe’s initial foray into the quartet, and first studio album in four years. It shouldn’t really be that much of a surprise based on references already given that the band live for a heavy/power metal montage and express numerous affinities for the Teutonic approach throughout the twelve main tracks (and 13th bonus cut “Cosmic Rebels” given a 2018 update).

Twin guitar harmonies abound along with higher pitch metal vocal action – as if Airborn has studied early Helloween, Running Wild, and of course a bit of Iron Savior for that triple threat sound that has cultural relevance, speed, and obvious street level cred. You can sense the sing-a-long qualities to specific instrumental breaks in addition to easy on the ear choruses for “Who We Are” and “Brace for Impact”. At times the rhythm section rises to the speedy antics of quicker verse play – making for an almost uppity-thrash dynamic to the otherwise straightforward metal template that is “Wolf Child”. Acoustic guitars and keyboards pepper other arrangements, along with darker/extreme vocal support at times from Disarmonia Mundi’s Claudio Ravinale on “Here Comes the Claw” plus guest singers from Norway and Canada on other cuts. The snare sound throughout has that cyber/digital snap that reminds me of Turbo period Judas Priest, and while the message for “Metal Haters” is one this scribe can get behind, the ‘Long live Metal/Fight the Haters’ mantra repeated throughout could have been dialed down a pinch.

Plenty of people subscribe to that German heavy/power metal style, perfect for live festival consumption. Airborn aren’t rewriting any of the playbook, they just know how to keep that ship steady and on course – making Lizard Secrets: Part One – Land of the Living acceptable if not predictable. 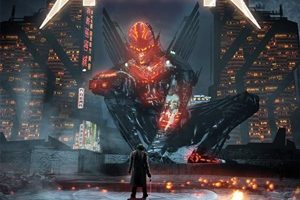