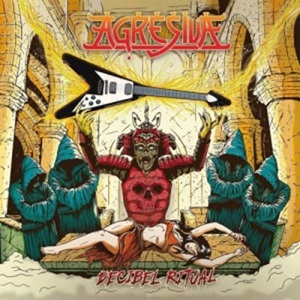 Seems like everywhere you go, thrash not only never went away – in today’s metal market, it’s more active than ever. Package tours hitting small arenas, festival audiences gaining exposure to newcomers and veterans – and quality product hitting the streets monthly, if not weekly. Agresiva hail from Spain, together since 2008 while issuing two full-lengths plus an EP for their career arc, leading to this third album Decibel Ritual. The skull-adorned character hoisting the flying V over a scantily clad female on the cover gives you proper set up into the musical outlook of the group – riffy, shifty, and melodic with plenty of Bay Area pinpoints.

Not necessarily epitomizing the raw, unbridled aspect of the genre, these gentlemen prefer to keep things sharper, cleaner, and gallop-oriented: it would be fair to say they’ve heard some Annihilator and Heathen in their prime. When choosing transitions, the swirls of mid-tempo passages cement themselves in a circular vortex – twin guitar runs and lead break tradeoffs that keep “Cleansing – The Aftermath” and “Grateful” standouts for incessant fist pumping action. The background bard-like unison vocals for “Under Silver Serene” give this cut a Teutonic power texture, the varied drumming from straightforward double bass to slightly progressive to be as versatile as the arrangement itself. When it comes to the main melodies, you’ll get a warbling aspect to the clean singing that isn’t necessarily out of place, but can be an acquired taste for some (check out the all over the low to high range work for “We Stand”) – imagine Martin Steene of Iron Fire gone slightly baritone, and that’s the best comparison to expect.

Thankfully distancing themselves from derivative Exodus, Slayer, and Testament riff raiding, Decibel Ritual proves Agresiva can unleash a bevy of power/thrash tricks that provide more musicianship intricacies that are appealing. Along with Angelus Apatrida and Crisix, Spain has an impressive crop of thrash bands many should explore – keeping the movement blossoming and the consumers dripping with sweat in the pit.