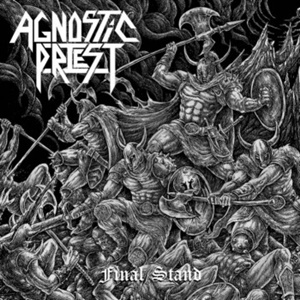 Oakland, California is home to Agnostic Priest – a crossover speed/thrash band who have issued a series of demos in 2017 leading up to the latest recording Final Stand. In theory, seven songs plus an intro could be considered a full album: the question is at this point, what constitutes an album? Especially in the case of a band where only two songs (“Abysmal Horror” and the title track) hover past the 2:03 mark, and the whole thing ends in a tidy 16:45. In the end, let’s focus on the material and execution – and at this point, the band possess a decent understanding of energetic riffs, potent stop/start mechanics plus transitions and exciting lead breaks to get the underground hordes moving.

Spitfire verses against galloping riffs and upbeat tempos seem to be the order of the day – the transitions brief to offer that momentary reprieve before the next speed/thrash combination careens across your speakers. The crossover element sporadically appears in a punk/hardcore/groove-like fashion, especially evident during the chorus of “Unit 731” – while the guitar harmonies on the follow-up “Abysmal Horror” encourage unison headbanging, the main riffs and galloping rhythms intertwining early Slayer and Metallica with a bit of Iron Maiden. Alex Sami as rhythm guitarist/main vocalist has that semi-forceful midrange that occasionally veers into a plaintive casual snarl, adequate but probably an area that could be improved upon with more seasoning. Gang vocals punctuate key phrases throughout the record (most evident on “Mallaeus Malefacarum” which features some fluid lead break mechanics from Magnus Polaris), and as far as the sound its lean and mean – containing a lot of that live off the floor atmosphere. There’s plenty of action to take in even at a shorter timeframe – and the Jenglot Hitam battle scene for the cover will be coveted by those who love metal artwork.

Final Stand contains a lot of old school ethics, galloping tempos, and the occasional mid-tempo crossover stomp that should gain modest attraction to any and all thrash maniacs. Agnostic Priest could be one of the newer breed of bands to keep tabs on as this is solid stuff – available at an always attractive name your price on Bandcamp.