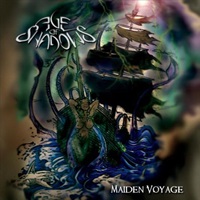 Hailing from Rochester, NY, Age of Shadows in their current incarnation may seem like a new band through their 2014 relaunch – but in reality, guitarist Jason Snyder and bassist Patches O’Brayer have been playing together with other musicians under the more common Stygian for almost a decade. Semantics aside, the sextet delivering the music on this 13 track full-length Maiden Voyage are a symphonic power metal group who add a flair for the thematic/dramatic while not relinquishing the riffs and high pitch melodies that put them firmly in the metal camp.

Keyboardist Christopher Conley picks his spots careful, supplementing rhythms and building more tension and atmosphere for power tracks like “Seventh King” and “Divinity”. Jason and his fellow axe slinger Dan Sheehan weave thick gallop-oriented riffs with proper counterpoint epic/power chord transitions, bowing at the treasure trove of artists like Dio, Iced Earth, and Iron Maiden. Be it more of a standard, crawling anthem such as “Sacred Land” or something like “Desolate One” that has a touch more dark energy and ferocity, these musicians certainly push their strengths for proper harmonization and killer hooks to the max.

And then there’s the obvious soaring pipes and personality tinged dramatic delivery from Jesse Halstead. Dio, Dickinson, and Tate come up when he ascends to the mountains, however the tendency to draw out certain closing notes for say “Hollow” or the title track can be like a shrieking Messiah Marcolin meets 80’s Sunset Strip glamour when going through a nasal congestion (although I love the bass slapping and semi-blast action in the former’s instrumental sections). He’s better suited to fluctuating in a variety of mid-range and lower registers with the occasional flash of bird call notes as “Surviving the Swamp” and the semi-progressive “Oblivion” are aurally on point.

Being a lone soldier could be beneficial to Age of Shadows in the long run stylistically. Maiden Voyage has a lot of late 80’s/early 90’s qualities in their symphonic power metal arrangements while steering clear on the speed shred/syncopation train most newer bands hang their credibility upon.