After the Burial – Dig Deep (Sumerian) 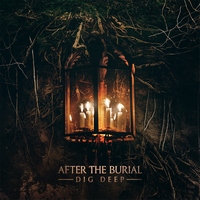 After the unexpected tragedy involving guitarist Justin Lowe, it would have been just as easy for After the Burial to throw in the towel, or even try to simply maintain the status quo with their sound to scrape by. But, as the album title suggests, After the Burial has made a number of steps to furthering their sound. The result is one of the band’s strongest front-to-back releases so far.

Dig Deep doesn’t notably alter the band’s sound and/or format, but what they do on this is continue to refine their sound. There’s less emphasis on the electronic elements this time around, which is a welcome change, and allows more of the guitar riffs and melodies to stand out on their own. Also working in the band’s favor is a slightly more aggressive approach, as noted as “Collapse” opens things up. When the band does move towards more melodic territory, as in “Deluge,” it provides an added dynamic to the album as a whole. Also helping out the dynamics is a good mix of the melodic riffs and interesting melodies/leads that balance out with the more djent-y riffs that the band has held a firm grasp of. For every chuggy and brutal track like “Mire” you get a more melodic “Laurentian Ghosts” to keep things level.

A solid step up from a band that could have easily gone down a very different route. After the Burial has stepped up to produce an album that should move them out of the shadows of the rest of their Sumerian brothers that have made a larger name for themselves. This is a band that could be leaders of their genre with their next album.