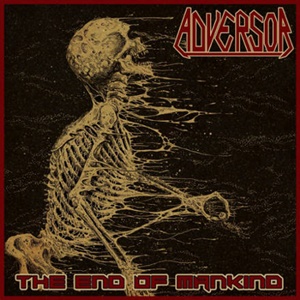 The career of Adversor begins in 2015 after the break-up of H.o.S.(the initials standing for Harvester of Sorrow) – who played for nine years together in the thrash realm and contained a pair of brothers Dado on vocals/guitar and Jacopo Cardi on the drums. Setting out on their own with bassist Emanuele Alimonti and lead guitarist Filippo Parise, they developed a demo and debut full-length Rise to Survive, armed and ready for a second album salvo in The End of Mankind. And for those that love speedy affairs where the solos blaze, the vocals fluctuate between sandpaper roars and supplemental gang backgrounds, plus a healthy dose of popping bass play, these songs could set the heathens charging into the streets.

The quartet push the accelerator every chance possible, only taking brief reprieves for acoustic/ wind-swept instrumental action for the 98 second “…On Death and Dying”, or the quick mid-tempo energy transference before going back to the races. Emanuele’s upfront bass plucking and progressive runs allow “Poisoned Lymph” and “Psychotropic Nightmare” to gain that Sadus meets Extrema/ Red Hot Chili Peppers texture, offering another aural catch point to the frantic riff parade, solid slamming drum ethics, and hurried word spew. Dado as a singer relies on a more discernible Mille-style delivery, and as stated above gains ample support from his cohorts in the background/shouting department for key phrases or words (‘Fear!’ and ‘We Rise’ during “The Fall of the Empire (We Must Unite)” an obvious reference point). When the group chooses to ride a part into a controllable groove like the 1:08-1:22 section of “Museum of Suffering”, you can sense affinity for that early Bay Area movement when Metallica and Slayer were seasoning their chops – Filippo also reverting to some licks and tricks that would appease Kerry King and Kirk Hammett.

No wasting time or overloading the arrangements with extended instrumental action – the riffs, hooks, lead breaks all have a get in and get out philosophy – as most of the material sits in that three-minute and change comfort zone. Adversor may not gain the biggest following because of their obvious window of influences, but The End of Mankind will elevate adrenaline and cause blood to be shed in the pit – and that’s the bottom line for speedy thrash, isn’t it?