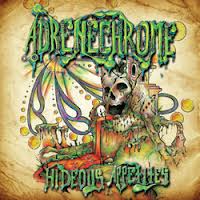 Refreshing to see a young, fledging band not take the trend bait. The easy option is of course, to learn one or two arpeggios and meld them with incessant beatdowns, ensuring a fast track to more Facebook “likes,” but a one-way ticket to irrelevancy. Ontario, Canada’s Andrenechrome do the opposite, translating to an Annihilator-meets-Mastodon composite, with probably more progressive tendencies lurking about. And yeah, big thumbs-up for this type of combo.

At only two years of age, Adrenechrome displays a keen eye for dynamics on their debut EP, Hideous Appetites, a lot of which come via the surprisingly agile vocals of guitarist/vocalist Chris Friesen. Friesen, who has instant personality, nuzzles himself between intrepid chord progressions and barreling thrash, producing some winning moments on “Six Guns” (that’s a total Mastodon opening, gentlemen) and “Hymn for the Heathens.” He’s reminiscent of the late 80’s thrash vocals who sang with clarity and appeal, ala Watchtower’s Jason McMaster and Annihilator’s Coburn Pharr.

Aside from the band’s occasional propensity to dip into the riff bags of Bill Kelliher and Brent Hinds, Adrenechrome gets down via the straightforward plunge of “The Horror” and the nuanced “Locust Wings,” which is the sort of all-encompassing song the band would be wise to trot out on a more frequent basis. There’s lots of variation to be found on Hideous Appetites, but it’s not like Adrenechrome is sticking to one angle and running it into the ground. In fact, once the band forsakes the gold mine that is Blood Mountain, they could be another one of Canada’s legitimate underground metal bands.

ADRENECHROME Checks In From The Road