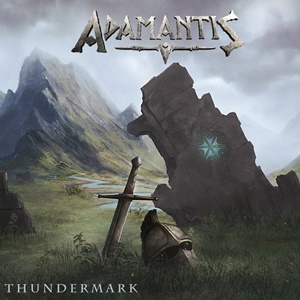 Crafting a brand of old school driven power metal, Adamantis hail from Massachusetts – the five-piece consisting of members from Europe and America, opening horizons for a diverse set of influences. Forming in late 2016, they’ve had rotating bass players come in and out until Liz Cleary joined in the fall of 2017 – establishing their presence through some live shows locally while refining the material that makes this debut EP Thundermark. Choosing to record at Zenbeast Audio with Anthony Lusk-Simone (Pathogenic) as a producer, it’s obvious that these ladies and gentlemen possess proper musicianship and composing mechanics to deliver a strong first impression release.

Uplifting riffs, pounding double bass, and supreme multi-octave melodies immediately burst forth from the speakers on the almost six-minute title cut opener. Guitarists Jeff Taft and Javier Estrada provide a firm rhythm/lead tandem foundation – even when the band choose to go into more of a mid-tempo, Priest meets Accept-like headbanging mold. “Mara” for instance contains a main hook in the verses that sits in that 80’s prime repertoire with supplementary lead spots sprinkled in and out for flavor, while drummer Evgeny Gromovoy and bassist Liz Cleary get a subtle spotlight in the instrumental section of the arrangement prior to the lead/twin harmony activities. The epic, NWOBHM/doom proclivities appear during “Lindisfarne”, a chance for singer Ashley Caval to stretch beyond her affinity for Bruce Dickinson and Ralf Scheepers into more of a Tony Martin meets Candlemass-like mountain top atmosphere. Closing with another barn burner in “Shieldmaiden” where the band cross Teutonic power traits with a serene Iron Maiden-like sequence before Evgeny slams his kit back into double kick overdrive – it’s refreshing to hear a local band combine American and European influences from multiple decades and across numerous sub-genres yet make it their own, not an easy feat this early in the band’s career.

Thundermark has all the fantasy and swords lyrical content that fans of Gamma Ray and Blind Guardian desire – while musically combining traits of Maiden, Priest, Accept, Primal Fear, and Helloween. A win-win for most melodic metal fans in the end, the future is quite bright for another New England metal act to shine. 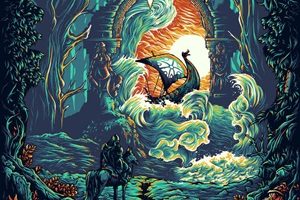