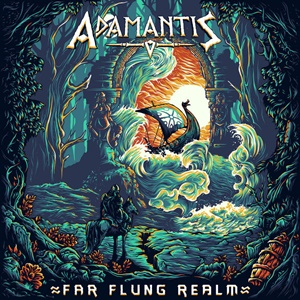 Transition appears to be a theme for Massachusetts-based power metal act Adamantis. Following the release of their debut Thundermark EP in 2018, they would lose their vocalist and bassist – setting the stage for new members to step up and take the group into the next phase of their career. Welcome bassist Cody Pelchat and vocalist Jeff Stark to the fold – who along with the established lineup of guitarists Jeff Taft and Javier Estrada plus drummer Evgeny Gromovoy continue with their full-length Far Flung Realm to expand upon their power framework – incorporating numerous European and American influences into an uplifting, majestic mix packed with stirring, cultural harmonies, hooks, and melodies to treasure.

Teutonic-like riffs cascade against some US/UK trademarks as well – the main chord progressions, offshoots, and gallops for songs like “Misbegotten Dream” and “Journey’s End” possess the spirit and attitude of 90’s heroes like Gamma Ray and Running Wild against upstarts like Visigoth and Eternal Champion, where people brandish bullet belts and hoist their devil horns in maniacal approval for what they are hearing. The choir-mead hall support in specific spots gives certain tracks even more of a larger than life, unified effect, “Puppeteer’s Bane” an early favorite between the steady supply of double kick/ thrilling fills from Evgeny and the twin rhythm/ melodic cultural lead accents of the Taft/Estrada axe team. Ex-Dark Moor singer Elisa C. Martin provides guest female contrast during the driving “The Oracle’s Prophecy”, an arrangement that features some fluid bass work, complementary emotive lead breaks, and soaring vocal performances from Elisa and Jeff who develop in tandem some killer screams and high pitch wow moments. Where Adamantis stretch a bit in terms of their songwriting is in a song like “Imagination”, musically a bit more straightforward and anthem-like in an older Savatage meets Candlemass-like mannerism, allowing Stark’s confident mid-range and resonance to shine through the verses and chorus almost in a Middle Eastern/exotic texture. Add in the winds and acoustic nuances that set up the epic old-school aspects for “Siege of Arkona” and it’s evident that this quintet are willing to flex their creative muscles in multiple directions for the sake of versatile, potent power metal glory. The overflowing, wonderous cover art by Piotr Bednarczuk matches the fantasy/history/swords and sorcery themes that this style gravitates towards – putting a proverbial bow on the final package.

Knowledge, skill set, and passion all roll together into an impressive product for Adamantis here on Far Flung Realm. Those who love the power metal genre, especially acts from the 90’s/early 2000’s, will find plenty to savor, appreciate, and spin again and again with this record. 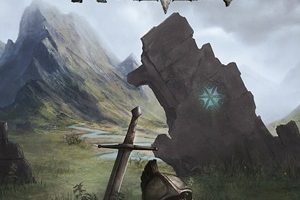