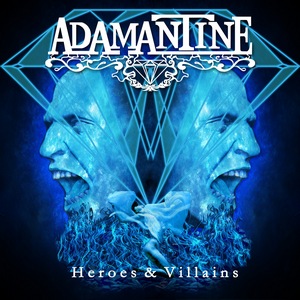 Adamantine – a term meaning rigid or unyielding, yet this scribe can’t see it without thinking instead of Wolverine’s claws. Though technically that would still work in terms of the claws. Regardless, the Portuguese band Adamantine have returned with their second full-length album, Heroes & Villains, and come off as anything but rigid…when it comes to their interpretation of set styles. Which is a good thing for sure.

Heroes & Villains will come across as somewhat familiar but it doesn’t mean that it’s lacking in style. Instead the band takes from melodic death, thrash, and metalcore to craft their sound and it’s an aggressive and somewhat modern take. The title track and “Fire that Cleanses” open the gates with plenty of enthusiasm and energy. While it may be somewhat assaulting and the thrashy tempo keeps things on the quicker side of pacing (“Hydra” is an exception to this), the band cherry-picks enough melodies and groove to keep the listener in the loop. Some progressive leanings make themselves more visible in the leadwork, with “Grudge” coming across as one of the highlights in this regard. The fiery melodies that make up the bulk of the music are the band’s strongest point, and should be enough to get most fans salivating a bit. But there’s a weak link in the chain, and it’s that the clean vocals just don’t capture the power that the songs gives them room for. The shouted, more ‘core influenced barks have a scathing bite to them that seems to nail what the band is going for, which makes the cleans (see “Reborn in Darkness”) come off as a bit weak. While there’s a more melancholic tone to them, it just seems like a bit more punch would keep the energy flowing a bit more.

Much to be excited about with Adamantine’s sophomore effort, particularly with the guitarwork. While the clean vocals may or may not be an issue for some, the rest of what Heroes & Villains has going for it is top notch. The band sits at the cusp of something that could be truly fantastic.