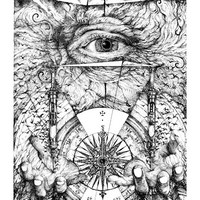 Sometimes, an album just needs a little extra time to brew in order to get the best result possible. Ad Nauseam’s debut, Nihil Quam Vacuitas Ordinatum Est, was five years in the making. The Italian band did the album completely in-house, not to mention they made some of the equipment that they needed in order to record the album to their own specifications. While it may seem that it was a painstaking effort, one listen to Nihil Quam Vacuitas Ordinatum Est will likely convince you that all of the time and effort was worth it.

Ad Nauseam channel a somewhat familiar, dissonant death metal approach that will draw some comparisons to bands such as Ulcerate, Gorguts, and Deathspell Omega. By no means is this copycat-level material though. The intricacies of Nihil bring themselves out with repeated listens and do not stick with the usual parameters. The way that Ad Nauseam slides through segments of frantic riffs to slower and more gritty atmospheric moments in and of itself is impressive. The songs have some incredible flow to them, which allows them go on to lengthier moments (such as the 11 + minute closer “Superimposing Mere Will and Sheer Need”) and not once does it seem like a drag. The grim and murky atmosphere also occasionally swaps itself out for a more horrific experience, with rather eerie effects and chilling samples (“Into the Void Eye”). The atmosphere at the end of “The Black Veil of Original Flaw” is particularly creepy. It adds to a sense of dread that the moments of occasionally off-kilter and intense death metal bring to the table.

A genuinely twisted take on death metal, Ad Nauseam are sure to be one of death metal’s underground gems for 2015. It’s also another victory for Lavadome Productions, who seem to be on quite a streak of death metal greatness this year. A thoroughly impressive debut, hopefully it won’t take another five years for a follow-up though.